Hale Aspacio Woodruff was an American artist known for his murals, paintings, and prints.

Woodruff was born in Cairo, Illinois, in on August 26, 1900. He grew up in a black family in Nashville, Tennessee, where he attended the local segregated schools. He studied at the Herron School of Art and Design in Indianapolis, Chicago Institute of Art, and the Harvard Fogg Art Museum.

Woodruff won an award from the Harmon Foundation in 1926, which enabled him to spend four “crucial years studying in Paris from 1927-31.”He studied at the Académie Scandinave Maison Watteau and the Academie Moderne. He learned in the city’s museums as well, while getting to know other expatriates, including Henry Ossawa Tanner, the leading African-American artist. Woodruff met leading figures of the French avant-garde and began collecting African art, which was a source of inspiration for many other modernists, including Pablo Picasso.

He returned to the U.S. in 1931 and married Theresa Ada Baker that year. They had one son, Roy.

Woodruff reluctantly returned to the U.S. due to financial strains from the Great Depression. He worked as an art teacher to support himself. Later he became the art director at Atlanta University, a historically black college. He taught classes at the university’s Laboratory High School, as well as for students at Morehouse and Spelman, a related college for black women. He founded the annual competition, Atlanta University Annual Exhibition of Paintings, Sculpture, and Prints by Negro Artists, which featured many African-American artists. This was conducted from 1942 to 1970.

In 1936 Woodruff went to Mexico to study as an apprentice under the famed muralist Diego Rivera, learning his fresco technique and becoming interested in the portrayal of figures. He returned to Atlanta and continued teaching. He began traveling to Talladega College in Alabama to teach and work on a commission for a series of murals.

After his return to the United States in 1936, Woodruff applied his understanding of Post-Impressionism and Cubism to painting and printmaking for social advocacy. Woodruff was inspired by the racism and poverty of African Americans in the South faced during the Great Depression.

During the 1950s Woodruff had three solo exhibitions at the Bertha Schaefer Gallery. 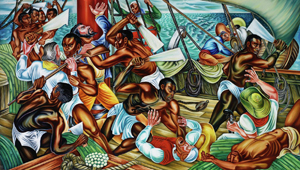 Woodruff’s best-known work is the three-panel Amistad Mutiny murals (1938), which he completed for the Savery Library at Talladega College. The murals are entitled: The Revolt, The Court Scene, and Back to Africa, portraying events related to the 1839 Mende slave revolt on the Spanish Amistad ship. This occurred after the United States and Britain had prohibited the Atlantic slave trade, but Spain continued to take slaves from Africa. The murals depict events on the ship when the captive mutinied, the U.S. Supreme Court trial, and the Mende people’s later repatriation to Africa.

An image of the ship is embedded in a design in the lobby floor of the library. College tradition prohibits walking “on” the ship, despite its central location. The library has another series of three Woodruff murals exploring events related to the black college’s role in African-American history, including freedmen enrolling after the American Civil War and the construction of campus buildings.

Woodruff’s two other surviving murals are The Negro in California History (1949), commissioned by the Golden State Mutual Life Insurance Company in Los Angeles. This work was a collaboration with Charles Alston. Woodruff also completed six panels completed around 1951 called Art of the Negro(1951) at the Clark Atlanta University Art Galleries.

In 1942, even with World War II raging, Woodruff initiated the Atlanta University Art Annuals, an exhibit and competition that was conducted until 1970. These 29 national art exhibitions were a key venue for black artists.

In 1946, Woodruff joined the faculty at New York University in Manhattan. He taught there for more than 20 years before retiring in 1968. Malkia Roberts was among his many New York students.