Ellis Wilson was an African-American artist associated with the Harlem Renaissance.

Wilson was born in 1899 in Mayfield, Kentucky. His parents were Frank and Minnie Wilson. Frank Wilson was a barber and amateur painter. Wilson attended the Mayfield Colored Grade School. He later attended the Kentucky Normal and Industrial Institute in Frankfort for two years, but was only allowed to take courses in agriculture and education. Interested in studying art, Wilson left school at 19 and moved to Chicago where he attended the School of the Art Institute of Chicago. He completed his art studies in 1923 and lived in Chicago for the next five years, seeking work as a commercial artist.

In 1928 Wilson moved to Harlem, New York, where he joined the Harlem Artists Guild and worked at a brokerage house. When Ellis first arrived in New York, black artists could not exhibit their work in mainstream galleries. He became an active member of the Harlem Renaissance, a collaborative effort to promote and exhibit the work of black artists. Ellis participated in many of the exhibitions associated with the movement.

Wilson worked for the Federal Art Project from 1935 to 1940. He was also commissioned to create triptychs for US Army and Navy chaplains. In 1944 he was awarded a Guggenheim Fellowship and subsequently traveled through the southern United States. Wilson was very interested in Haiti and visited the country regularly beginning in 1952. His fondness for the country and its people is reflected in the vitality of paintings during that time period.

According to artist, Samella Lewis, “Wilson always produced fully accomplished and sophisticated design patterns…Making bold use of color, his paintings reflect a coherent and personal style that combines aspects of Expressionism with contemporary Realism. His vigorous distortion of form, one of the aspects of Expressionism, is evident in such compositions as Bird Vendor. 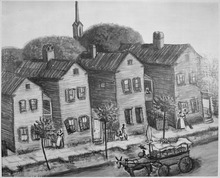 Although Wilson had several exhibitions and won several prizes for his paintings he never became wealthy. He died on either January 1 or 2, 1977, and was buried in a pauper’s grave. The exact date of his death and site of his grave is unknown.

Ellis Wilson’s painting “Funeral Procession” was featured in the American television NBC sitcom The Cosby Show, in Season 2, “The Auction”. In this episode, Clair Huxtable, played by Phylicia Rashad, bids on the painting by her great-uncle (Ellis Wilson), and she wins the auction. The painting then remains in the Huxtable living-room throughout the series.