Norman Wilfred Lewis was an American painter, scholar, and teacher. Lewis, who was African-American and of Bermudian descent, was associated with abstract expressionism, and used representational strategies to focus on black urban life and his community’s struggles.

Norman Wilfred Lewis was born on July 23, 1909, in the Harlem neighborhood in New York City, New York. He was raised on 133rd Street, between 7th and 8th Avenues. Both of his parents were from Bermuda, his father Wilfred Lewis, was a fisherman and later a dock foreman, and his mother Diane Lewis, was a bakery owner and later a domestic worker. He had two brothers and Norman was the middle child, his eldest brother Saul Lewis became violinist, later playing jazz music with notable musicians such as Count Basie and Chick Webb. Lewis attended Public School No. 5, which at the time was a primarily white student population. He was always interested in art, but he did not express it in early childhood due to a lack of resources and of being overshadowed by his older brother with musical talent.

As a young man, he started studying art through self-education and he had amassed a few commercial art books, initially he would practice drawing from them.[1] Often he would get frustrated by the level of detail he was not able to achieve when compared to the commercial art, unaware that he was copying the art at a different scale than they were produced. He later started studying art history books with more success.[1] Self-education of art got him started in his career but it later complicated his relationship with teachers and other students, and he struggled with fully understanding some of the learnings.

A lifelong resident of Harlem, starting around age 20 he also traveled extensively during the three years that he worked on ocean freighters. As a seaman, he traveled to South America and the Caribbean.

When he returned from sea, he got a job as a textile and garment presser in a tailor’s studio and it was there he met artist Augusta Savage because her art studio was in the basement of the tailor’s shop. He studied art with Augusta Savage at Savage Studio of Arts and Crafts in Harlem. Savage, was an important early influence who provided him with open studio space at her Harlem Community Art Center, he joined an art collective Savage was a member called the 306 Group, and he was an early member of Savage’s African-American arts organization the Harlem Artists Guild.

Between 1933–1935, he studied at Teachers College, Columbia University and at the John Reed Club Art School.

He also participated in Works Progress Administration as an art teacher starting in 1935, alongside Jackson Pollock, among others.

Lewis began his career in 1930, with earlier mostly figurative work and social realism. He at first painted what he saw, which ranged from Meeting Place (1930), a swap meet scene, and The Yellow Hat (1936), a formal Cubist painting, to Dispossessed (1940), an eviction scene, and Jazz Musicians (1948), a visual depiction of the bebop music that was being played in Harlem. His social realism was painted with “an overtly figurative style, depicting bread lines, evictions, and police brutality.”

Lewis said he struggled to express social conflict in his art, but in his later years, focused on the inherently aesthetic. “The goal of the artist must be aesthetic development,” he told art historian Kellie Jones, “and in a universal sense, to make in his own way some contribution to culture.”

Norman Lewis was the only African-American artist among the first generation of abstract expressionists; his work was overlooked by both White and African-American art dealers and gallery owners. He did not fit into either category perfectly. As was recently noted in a catalog accompanying a major retrospective of Lewis’s paintings this omission seems clear enough. His work was overlooked many times because of his political involvement, and also because of the area where he lived. His skin color at this time period had a major impact on his work life. 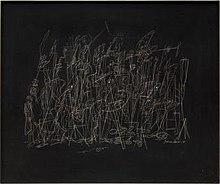 In the late 1940s, his work became increasingly abstract. His total engagement with abstract expressionism was due partially to his disillusionment with America after his wartime experiences in World War II. It seemed extremely hypocritical that America was fighting “against an enemy whose master race ideology was echoed at home by the fact of a segregated armed forces.” Seeing that art does not have the power to change the political state that society was in, he decided that people should develop their aesthetic skills more, instead of focusing on political art. Tenement I (1952), Harlem Turns White (1955), and Night Walker No. 2 (1956) are all examples of his style. Twilight Sounds (1947) and Jazz Band (1948) are examples of his interest in conveying music.

One of his best-known paintings, Migrating Birds (1954), won the Popular Prize at the Carnegie Museum’s 1955 Carnegie International Exhibition, the New York Herald-Tribune calling the painting “one of the most significant of all events of the 1955 art year.” His signature style in those decades included repetitive ideographic or hieroglyphic elements that allowed Lewis to incorporate narrative sequences into his paintings.

He became interested in the Abstract Expressionist movement and began attending meetings at Studio 35 with The Irascibles, at a loft at 35 East Eighth Street, Manhattan. He was the only African-American in attendance and it was through these meetings he met David Smith, Ad Reinhardt, Mark Tobey, and Richard Lippold. However, Lewis did not fully embrace the Abstract Expressionist movement because “it did not favor all artists equally”, and he was struggling with attaining collectors and museums despite his awards and prestigious exhibition history.

Lewis was a founding member of Spiral, a group of artists and writers who met regularly between 1963 to 1965, which included Charles Alston, Romare Bearden, and Hale Woodruff. The group met “to discuss the potential of Black artists to engage with issues of racial equality and struggle in the 1960s through their work.” The Spiral group disbanded in 1965, as a result of discrimination of the group, and Lewis felt that protesting was a better way to bring attention and deal with the social issues than painting was.

Despite Spiral’s short existence, it was very impactful in the art world, as it called attention to many issues of racial inequality that existed at the time. For instance, due to Spiral and other groups’ continuous protest against the 1968 controversial exhibit “Harlem on My Mind” in the Metropolitan Museum of Art, Black people became more visible in the art world. Before this exhibition, the Met did not feature anything on New York’s cultural powerhouse neighborhood Harlem. Harlem is known for its art and music, but this exhibition featured no self-representation of that from the neighborhood and instead, it was composed of photographs that a non-Harlemite photographer took of the people who lived there.

In 1969, Lewis founded the Cinque Gallery in New York City along with Romare Bearden and Ernest Crichlow.

He started teaching at the Art Students League of New York starting in 1972, and work there until his death in 1979.

His body of work included paintings, drawings, and murals. Although he was represented by Willard Gallery, his only gallery representation, and he was the recipient of many awards and good reviews, his work did not sell nearly as well as the other Abstract Expressionists he exhibited with such as Mark Tobey or Mark Rothko. He was not included important publications for Abstract Expressionism of the time, including The Triumph of American Painting: A History of Abstract Expressionism (1970) and The New York School: The Painters and Sculptors of the Fifties (1978) by Irving Sandler and never mentioned in the writings by Dore Ashton.