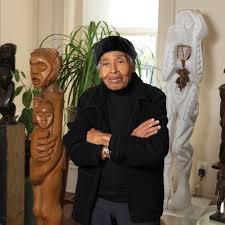 Her work has been exhibited in the United States, Sweden and Lagos, Nigeria.She has been selected for residencies in Pennsylvania, New Hampshire and New York and has received a New York Foundation for the Arts grant in printmaking. Maynard currently resides in Baltimore, Maryland.

Maynard studied painting and drawing at the Museum of Modern Art, printmaking at the New School for Social Research and received a master’s degree in Art/Sculpture in 1977 at Vermont’s Goddard College

Maynard has taught at the Studio Museum in Harlem, at Howard University and at the University of the Virgin Islands. She has been an artist in residence at both the Rochester and Massachusetts Institutes of Technology.

She also specializes in the preservation and restoration of traditional art by people of color and was a cognitive in the Black Arts Movement.

Maynard was artist-in-residence at The Studio Museum in Harlem where she was a part of a group exhibition Labor, Love, Live Collection in Context, held between November 2007 and March 2008. Her work is in the private collections of people such as Stevie Wonder, Lena Horne and Toni Morrison.

Maynard’s themes of social inequality were solidified during the 1960s and 1970s trial of her brother, William Maynard. Mr. Maynard was wrongfully convicted of murder and spent six years in prison before he was vindicated. These events were reflected in her sculpture We are Tied to the Very Beginning where Maynard reflects upon the Civil Rights Movements during the 1960s and 1970s. The aesthetics of African identity are profound in the construction of the head on the figure and it’s clenched fist. The head being a prominent part in many of Maynard’s figures reference the distorted quality of African artwork made by the Igbo or Yoruba people. The clenched fist is an iconic image associated with the liberation of African Americans and is considered an indispensable part of the body in many African societies.  and “it relates the African-American body politic to its cultural and spiritual roots in Africa. Second, it uses this connection to reinforce the Civil Rights struggle of the 1960s and 1970s during which the raised clenched fist salute.” By re-contextualizing these motifs present from the Middle Passage to the Civil Rights Movement into her work Maynard makes a powerful commentary on the struggle of those in the African diaspora to achieve and maintain equal rights.

In January 1977, Maynard was part of a contingent of hundreds of African-American artists who represented the North American Zone, exhibiting in FESTAC 77, the Second World Black and African Festival of Arts and Culture in Lagos, Nigeria.

In 2003, Maynard was commissioned by the Metropolitan Transportation Authority to create a glass mosaic mural entitled Polyrhythmics of Consciousness and Light. The public artwork remains permanently installed in the subway station on 125th Street in New York City.

Karen Berisford Getty, in a Virginia Commonwealth University thesis, “Searching for Transatlantic Freedom: The Art of Valerie Maynard”, examines the history of Africans in the Americas, and Maynard’s synthesis of African elements in her work.