Ealy Mays hailed as one of the most outstanding African-American artists of his generation, Ealy Mays is a painter’s painter who believes art should be accessible to all. Born in 1959, in Witichita Falls, TX, today, the Paris-based artist creates action-packed paintings, which animate history in a visual language all his own. Like painted tapestries, Mays’s meticulously detailed canvasses brim with narrative symbolism, weaving together the various political events, technological developments, and cultural attitudes, which have produced the scene depicted. 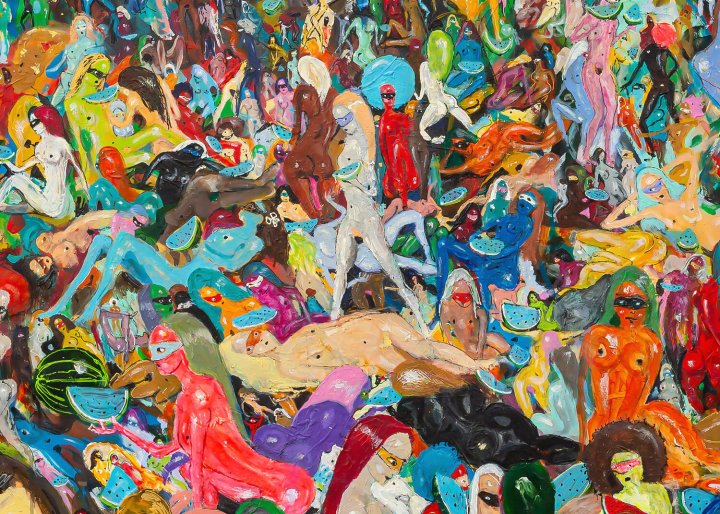 An artist born into a family of doctors, as a young man Mays was encouraged to attend medical school. After graduating from Wiley College in Marshall, Texas with a BSc. in Chemistry and Biology, Mays moved to Mexico, where he set out to pursue painting while attending the Universidad Autónoma de Guadalajara School of Medicine. In Guadalajara, he quickly discovered the local art scene and met such celebrated artists as RUFINO TAMAYO who would later become his mentor.

Upon his return to the United States, Mays was accepted for a residency at the prestigious SKOWHEGAN SCHOOL of Painting and Sculpture in Maine. Colleagues in residence included fellow artists ANISH KAPOOR, GARY HILL, NAN GOLDIN, and JACOB LAWRENCE, the most widely acclaimed African-American artist of the twentieth century. LAWRENCE became both friend and mentor, describing MAYS in a letter of reference to the Studio Museum in Harlem, as a “pure painter”, emphasizing his natural talent and his audacity in never following the crowd.

In search of “an intellectual environment to think, to breathe, and to paint,” in the late 1990s, Mays moved to Paris, where he was quickly invited as a permanent recurring resident at Cité Internationale des Arts.  As he continued exhibiting in the USA and  Europe, international recognition of Mays’s work reached new heights. In both 2005 and in 2007, the artist’s series The Migration of the Superheroes was showcased at the Carrousel du Louvre, making Mays the second African-American artist (their first was Henry Ossawa Tanner in 1897) to have an exhibit in the modern gallery of the great museum. His 2018 retrospective at ABXY Gallery marked the artist’s return to New York City. After showing internationally for nearly ten years, it was Mays’ first exhibition in Manhattan since 2008,  when a collection of his previous works were stolen from and put up for sale on the black market.

He has exhibited in such distinguished institutions as The Guggenheim Museum, (New York), the Louvre (Paris), Hammonds House (Atlanta), Galeria Clava (Mexico), and many more. His work is included in such prestigious collections as The Joyner Giuffrida Collection of Abstract Art, the collection of Larry and Brenda Thompson, as well as those of Reggie Van Lee, and George N’namdi.