Hancock was born in 1974 in Oklahoma City, Oklahoma, and grew up in Paris, Texas. He received a BFA from Texas A&M University-Commerce. As an undergrad, Doyle worked as a cartoonist for his school newspaper. At the time he thought he would become a professional cartoonist following graduation. The influence of Hancock’s early interest in cartoons is still visible in his current work. Following his studies at Texas A&M University-Commerce Hancock earned an MFA from the Tyler School of Art at Temple University, Philadelphia.  Hancock’s art was also significantly influenced by his upbringing in the town of Paris, Texas. Church was a fundamental focal point of his childhood, as his stepfather was a minister. Thus, religious tropes and themes are abundant in his works, such as recurring references to redemption and the Eucharist. 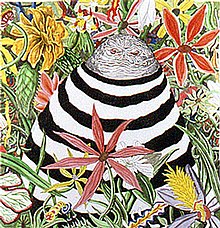 His influences include comics, graphic novels, cartoons, music, and film.

Hancock is known for his visual work that focuses on the Mounds and the Vegans, two forces that are constantly dueling with one another and serve as a representation of the eternal battle between good and evil. This extended series also serves to explore Hancock’s mythology of the two forces, which gives him the opportunity to develop his concepts at length. He has structured this world to be one he can both occupy and continuously rework, depicting the life stages of a variety of characters, such as the Mounds: ancient half-human and half-plant creatures which were created thousands of years ago when a human male ejaculated into a field of flowers. The Vegans are malevolent beings who seek to destroy all Mounds, especially “The Legend”: the original Mound, and the most despised among Vegans. The Vegans are meant to symbolize those who are determined to force their beliefs on others, whereas the Mounds symbolize the Earth, acceptance, love, and progressive behaviors. Other key characters in Hancock’s works are Painter, a maternal spirit who governs color, Loid, a paternal energy focused on words, and Torpedo Boy, an unheroic superhero alter ego that Hancock created as a child. Torpedo Boy has superhuman strength, but his human emotions—especially his pride—prevent him from performing his heroic duties to their fullest extent. Additional characters that appear in the work alongside him include Junior Mound, Bringback, Baby Curt, and Shy Jerry.

Trenton Doyle Hancock is known for taking risks in his art, and has stated that he is typically the most interested in his art when he feels he has done something daring with it: whether it deals with social issues, universal dilemmas, or personal matters. Regarding whether Torpedo Boy and the Vegans are meant to symbolize good and evil in his works, Hancock states: “Hopefully there’s a range of what the Vegans are, and what Torpedo Boy is. You can choose to identify with that range or not. I came from a household where there were very strict ideas about what good and evil are. When I left home I realized that it didn’t really work for me, that life was a huge grey area. That became more interesting.”

In 2013 his work was translated to Cult of Color: Call to Color, a ballet created in collaboration with Ballet Austin’s Artistic Director Stephen Mills.