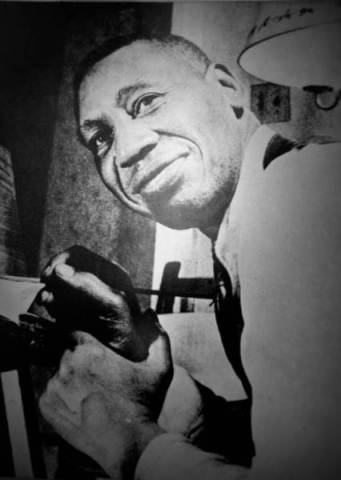 Born on February 22, 1888, in West Chester, Pennsylvania, Horace Pippin created art as a child, though he lost the use of his drawing arm in World War I. He persevered and taught himself to paint with his injury, becoming a MOMA artist acclaimed for his renderings of African-American life along with biblical imagery and historical scenes. Published in magazines as well, Pippin died in West Chester on July 6, 1946.

Horace Pippin was born on February 22, 1888, in West Chester, Pennsylvania, moving to Goshen, New York as a small child. Though facing some initial challenges from school authorities, Pippin developed a love for creating art, winning accolades and developing a reputation in his neighborhood for his craft even with limited illustrative tools.

With his mother poor in health, he left school in his early teens to earn income, working for years at a hotel and subsequently holding other jobs. Upon joining the army, he was sent overseas to France to fight in World War I as part of the African-American 369th Infantry, aka Harlem’s Hell Fighters. (The entire unit eventually received France’s Croix de Guerre honor.)

Loses Use of Arm

Pippin was badly hurt and lost the use of his right arm after being shot, returning to the states in 1919 and moving back to West Chester. He wed Jennie Wade in 1920, with the couple going on to have a son.

Pippin eventually used a poker to hold up his right arm, which he had used to make art, and began to draw again as a therapeutic outlet. He relied upon his left hand to guide his right to complete his first post-war work, Losing the Way (1930). Using both burnt-wood techniques and oil paints with a celebrated eye for intricate detail and social explorations, Pippin went on to complete dozens of paintings over the course of his career.

After his work was featured in a home county show, he became part of a traveling group exhibit with the Museum of Modern Art in 1938. Other prominent showings followed. With his work often characterized as folk art, Pippin portrayed scenes of African-American life as seen in Domino Players (1943) and Harmonizing (1944). He was noted for biblical paintings like Christ and the Woman of Samaria (1940) and his own richly textured self-portraits as well.

Pippin was also known for historical, politicized output with a series of paintings about abolitionist John Brown and President Abraham Lincoln. He was completely self-taught as an artist outside of a limited stint of classes at the Barnes Foundation and was featured in publications like Newsweek and Vogue.

Horace Pippin died on July 6, 1946, of a stroke in the town of his birth. His wife passed very shortly thereafter. Major exhibitions of his work have been curated after his death at institutions like the Pennsylvania Academy of the Fine Arts and the Metropolitan Museum of Art. A digitized collection of Pippin’s notebooks and letters, including some of his experiences as a youth and later enduring the war, are available online at the Archives of American Art, part of the Smithsonian Institution.