William Edouard Scott was an African-American artist. Even before Alain Locke asked African Americans to create and portray the New Negro that would thrust them into the future, artists like William Edouard Scott were depicting blacks in new ways to break away from the subjugating images of the past. William Edouard Scott, well known for his portraits, Haitian scenes, and murals, challenged the standard depiction of blacks in art in the first half of the 20th century by utilizing black subject matter in an uplifting way. However, just as his style remained traditional as opposed to abstract, he was relatively conservative in his portrayals of blackness.

Scott was born in Indianapolis in 1884. After graduating from Manual Training High School in 1903, Scott spent a year studying drawing under Otto Stark. In 1904 he moved to Chicago and attended the School of the Art Institute of Chicago, where he won the Frederick Mangus Brand prize for pictorial composition. During his time in Chicago, he painted murals around the city, one of which was Commerce, which is still lauded today as “remarkable”. He learned much of his palette and impressionist technique, however, during his travels to France. While abroad he studied at Académie Julien and Académie Colarossi and was mentored by Henry O. Tanner, a famous African-American artist who moved to Paris to avoid racial prejudice against his art. Training in Paris, Scott was able to build a reputation for himself more easily than his race would have allowed in America. Perhaps because of this, he seemed to be more conservative in his portrayals of the “New Negro” than others in the movement, and sometimes painted scenes that had nothing to do with race at all. During the years 1910–14, for example, he occasionally visited his former teacher at the Etaples art colony and while there painted local scenes such as the atmospheric Rainy Night at Étaples and others under Tanner’s influence.

After his formal education was complete, Scott received a Rosenwald Foundation grant and traveled to Haiti to paint those who had “maintained their African heritage”. Later he traveled to Alabama to study blacks in different communities in the South. By refusing to paint blacks as only slaves and laborers(as so many before him had), Scott hoped to “reverse the stereotypical perceptions of African Americans and eventually foster an understanding among the races”. When he returned to Chicago, Scott continued with that goal as he portrayed “blacks on canvas in positions of prominence doing noble deeds” throughout the portraits and murals he created for the rest of his life. 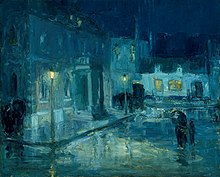 In 1931, Scott was awarded the Julius Rosenwald fellowship (Rosenwald Fund) for study in Haiti. During his time in Haiti, Scott truly captured the essence of the society in that nation. One of his more famous paintings from this period is Night Turtle Fishing in Haiti, 1931, which depicts the work of four Haitian men out on the water. “The richness of color beneath the hazy, sunlit sky, and the diagonal thrust of the boat tilting under the force of the waves demonstrate the vitality and power that make Scott’s Haitian paintings his most successful artistic accomplishments”. But in addition to the strength that the images convey, there is an underlying sense of peace and calm. Scott “often constructed his composition so that light plays a leading role in defining… the character of the event,” and that practice is evident in this case. The sunlight illuminates the heads of the men from behind, creating an angelic image. This suggests that Scott, who painted many religious murals later in his life, is glorifying the action they are performing—transforming it from a laborious task to the embodiment of the independence and freedom that Haitians enjoy, highlighting the fact that they are completing this task of their own free will. The white birds flying around the boat add to this effect. The cool colors that Scott used for this piece not only differentiate it from many others created during this time, but also portray a sense of serenity. Despite the obvious difficulty of the job at hand, this peace seems to characterize this scene or even perhaps the community as a whole. These Haitian men are portrayed grandly—not as servants, but as independent and self-sufficient members of their society.

The lively markets in Haiti were one of Scott’s favorite subjects, and he portrayed this scene and all its hustle and bustle in Haitian Market, 1950. This painting “captures the crowded atmosphere and inherent exoticism of the island’s markets. The classical columns in its architectural backdrop add an element of grandeur and solidity to the bustling scene”. Furthermore, he again utilizes light to pull the viewer into the piece, personalizing the Haitian people and setting a standard of equality—not only between the people in the market, but also between the viewer and the subjects in the painting as the viewer becomes a participant in the scene. These people are humanized through this work, which in and of itself was revolutionary in nature. Until works such as these from Scott, the artists in Haiti were accustomed primarily to French art. Scott’s works during this period showed the natives “that there was a wealth of subject matter at home”. Through these portrayals of blacks, he worked toward his goal of forging an interracial understanding.

Portraits and murals of African Americans

When Scott returned to the United States, he continued to paint blacks and black subject matter in ways that redefined the image of blacks in art. An example of his positive depictions of members of the black community is his painting Frederick Douglass. In the painting, Douglass is “shown in a pensive profile as if the burden of the world were on his shoulders”. And while Scott often uses lighting to highlight some aspects of his work, he uses it here in a rather surprising way. His skin tone, while black enough to look historically accurate, appears paler than would be expected. It looks as if light were shining so directly on the subject that his skin appears lighter—but this is an interesting choice when Douglass’ blackness was something that defined him and his actions throughout his life. Choices like that suggest a certain amount of conservatism on Scott’s part—even though he is painting a man that did much for the African-American community, his race is far from highlighted. Instead, the key aspects of the painting are Douglass’ deep stare and his furrowed brow, which speak much more of his respected status and position of responsibility than of his role as a black man. Furthermore, the setting and his clothing both add to the respectability of Douglass—he appears to be situated in a library, suggesting his education and intelligence, and he is wearing a suit, suggesting his success. As Scott chose to paint this prominent African-American man, he is obviously challenging the definition of “blackness” through his portrayal of a “New Negro” character. However, while Scott is making a rather revolutionary statement by painting this black subject, it is suggested that it is Douglass’ character and not his blackness that makes him worthy of painting—a tribute to Scott’s conflicting conservative and liberal approaches to the race issue.

Frederick Douglass was a recurring figure in works by Scott, and in 1943 Scott was selected as “the only black artist chosen to create a mural for the Recorder of Deeds Building in Washington, D.C.”. In this mural, Douglass Appealing to President Lincoln, 1943, Scott tells the story of Douglass’ appeal for African American participation in the Union armies in the American Civil War. “Scott, in his manner of depicting the exchange between Lincoln and Douglass, suggests that the fiery orator is here the aggressive speaker. Whereas Douglass, hands extended slightly, shifts his weight forward while speaking to Lincoln, the president appears to avoid looking into Douglass’s eyes and concentrates on listening to his words”.  Furthermore, the strewn and scattered papers on the desk and around the trashcan suggest urgency and desperation—and this was certainly the case. “The Civil War was proving much more difficult than the Union leadership had expected”. And while Douglass presents a possible solution to the president, it is far from ideal in Lincoln’s eyes. Many whites of this time didn’t believe that African Americans could be effective soldiers. Regardless, Douglass is undeniably the active part of this depiction, which again portrays African Americans as functioning members of society. This portrayal furthers the message inherent in the subject matter: African Americans could be equally as patriotic, and thus equally effective as soldiers, as any whites. Ironically, though—in the same manner as in Frederick Douglass—Douglass’ “blackness” is slightly downplayed yet again. Douglass’s skin appears barely darker than the shadowed parts of Lincoln’s. Thus, this painting serves as another example of Scott’s small step, though not a leap, in the direction of the New Negro movement.

William Edouard Scott was a major part of the transition in the depictions of blacks in art. His mentor Tanner did not push the issue of race in his work after realizing that “the European community could not be expected to understand or appreciate a theme that was distinctly American in nature”. Scott, on the other hand, was able to do what Tanner did not—he portrayed the “New Negro” for which Alain Locke would call in the 1920s. However, “He nonetheless remained conservative in his treatment of race… He steered clear of the emphatic embrace of black physiognomy” But it was Scott’s use of subject matter that was not only positive but also inherently black that was his contribution to the New Negro movement. Through his portraits and murals, in addition to depicting religious and political themes that had nothing to do with race, Scott’s works began to cross the racial barrier and forge connections through art to the black community and the history there.

In Chicago’s Bronzeville district, Scott painted several prominent and historically important murals at the Wabash YMCA. These murals fell into extremely critical condition with the underfunding of the Wabash YMCA. However, when The Renaissance Collaborative restored the Y, the murals were cleaned extensively and restored. They are now considered a part of a Historic Landmark.

However, just as Scott’s artistic style remained traditional and based on the impressionist techniques he had initially learned, his approach to race remained somewhat conservative until his death in Chicago in 1964.