Annette Jimerson is an American artist who works in a wide variety of media. However, she is known for her whimsical and prolific painting abilities, both realist and abstract. Primarily painting in acrylic and oils, she also makes watercolor works, with subjects ranging from still life, landscapes, and portraits to abstracts. She also works in pen and ink, colored pencils, and sculptures. Her work has been described as “incredibly lifelike, reviving and breathtaking” (Weems Art Gallery).

Jimerson also writes and creates illustrations for children’s books,  an occupation that started as a “hobby” and grew from there. 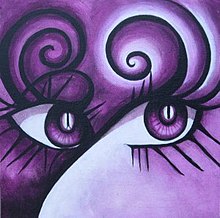 Jimerson discovered her artistic abilities at the age of seven, and has been developing her artistic skills ever since, branching off into a variety of media. “It was her early age fascination with drawing eyes with detailed eyebrows, eyelids, and colors that brought attention to the skillful young artist.” When her work was seen at the Memphis University Fine Arts Department, the chairman said that they had “never seen anyone so young paint with such experience.

For the next several years Jimerson was accepted into several galleries across the United States, and featured in many art shows selling many paintings, gaining newspaper and news station coverage with several different press releases, including Channel 7 News, The Perspective, and the Cedar Rapids Gazette. Damon Hitchcock, the art professor at San Diego City College, who had 24 years’ experience teaching, once gathered the whole drawing class of 33 to watch Jimerson work, stating she was “the most prolific artist he had seen.”