Claude Clark was born on a tenant farm in Rockingham, Georgia November 11, 1915. In early August 1923, Clark’s parents left the south for a better life in Philadelphia, Pennsylvania during the Great Migration. Clark attended Roxborough High School. where he wrote poetry but also discovered a talent for painting. His Sunday School teacher encouraged him to exhibit in Sunday school class and at church.

Clark studied at the Philadelphia Museum of Art (1935-1939) following high school graduation. He applied to and was eventually accepted to the Barnes Foundation in 1939.

In 1941, Claude met the daughter of an African Methodist Episcopal Church minister, Effie May Lockhart from California. They married in June 1943 and formed a dynamic “power” partnership in art, education and philosophy.  He continued his paint studies at The Barnes Foundation while teaching art in the Philadelphia Public School system during the early years of their marriage. The couple moved to Alabama and finally California while continuing their careers.

Clark was the subject of many articles and publications. He also was the author of A Black Art Perspective, a Black Teachers Guide to a Black Visual Arts Curriculum, Merritt Press 1970. As a member of the Black West Coast Arts Movement, he co-developed the first African American Studies curriculum. He also mentored and supported many young emerging scholars and artists.

Industrial Art (later the University of the Arts) on full scholarship. While studying there, he came across the work of Van Gogh. Van Gogh’s style and method formed the basis of Clark’s approach to drawing and painting, with a thick creamy texture and loosely applied paint using a palette knife.

In 1939 Clark applied to the Barnes Foundation in Merion, Pennsylvania and was accepted. Clark studied at Barnes from 1939 – 1944. The Albert Barnes collection consisted of an array of works that included African art, European Impressionism and American art. He was able to investigate the hundreds of original “old masters” in the collection and modernist works and to study first hand one of the first important collections of African art in America. 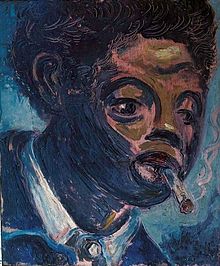 Clark matured in art by recognizing his opportunity to develop without being constrained by the racism, poverty, and inherent inequality of circumstance prejudice and labels bring. His work exhibited social realism, modern and abstract styles. When Clark could not afford paint, he salvaged throw away paint cans from trash bins in the back of art schools and mixed his own. Unable to afford to buy paintbrushes and chemicals to clean them, he mastered the use of the palette knife.

Clark painted and exhibited from a very early age and sold his first works in his early twenties. Collectors continue to seek Clark’s works 70 years later. Clark worked at various jobs throughout the late 1930s and mid-1940s before accepting a position as an art instructor with Philadelphia Public school in 1945 – 1948.

Clark became interested in working for a Black college as his interest in African and African American history developed further. He accepted a position at Talladega College, Talladega, Alabama as an Associate Professor of Art (1948 – 1955). Clark painted, taught, exhibited, and researched his interest further while supporting his family consisting of a wife Diama (Effie), son Claude Lockhart Clark and daughter Alice.

In 1955, while teaching at Talladega, Clark began feeling the financial pressures and made the decision to move his family to his wife’s native state of California to seek greater opportunity. Clark enrolled in Sacramento State University and taught art classes to other undergraduate students while simultaneously obtaining his Bachelor of Arts degree. Following graduation in 1958, Clark accepted an art instruction position with Alameda County, California (1958 – 1967), and eventually secured a faculty position within the University of California system as an art instructor (Merritt College, 1968 – 1981).

Clark continued to paint, research and exhibit throughout this period. Clark worked from his studio in Oakland, California following his Merritt College retirement from 1981 – 1998. He has exhibited in the United States, Africa, Caribbean, Europe and South America.