Frederick J. Brown was a New York City-based visual artist originally from Chicago. His style ranges from abstract expressionism to figurative. His artwork was influenced by historical, religious, narrative and urban themes. He is noted for his extensive portrait series of jazz and blues musicians.

Frederick James Brown was born in Greensboro, Georgia on February 6, 1945. His mother was Geneva Brown and his father was Andrew Bentley. He was raised near the steel mills on Chicago’s Southside. Brown was exposed to the blues through musicians in the neighborhood such as Muddy Waters, Howlin’ Wolf, and Memphis Slim.

In 1970, Brown moved from Chicago to New York City’s SoHo neighborhood which at the time was home to many artists, musicians, writers and dancers. There he collaborated on multi-media projects with other artists including jazz musicians Ornette Coleman and Anthony Braxton, video photographer Anthony Ramos, and other painters like Grégoire Müller, Frank Bowling and Daniel Johnson. In addition to collaborative paintings, Brown contributed to performing arts productions like Be Aware, Stolen Moments and Portrait of a Painter. Anthony Braxton composed and performed the music and Anthony Ramos created the videos for the latter two projects. Brown’s loft at 120 Wooster Street became a gathering place in SoHo during this period.

During this time, he focused much of his work on creating portraits of jazz and blues musicians. This series contains over 350 pieces, including popular artists such as Ornette Coleman, Louis Armstrong, Billie Holiday, and Lionel Hampton in addition to less well-known jazz and blues artists.

Brown taught art at the Central College of Fine Arts in Beijing in 1985 and 1987. In June 1988, Brown had a retrospective exhibition of 100 artworks at the Museum of the Chinese Revolution, becoming one of the earliest Western artists to exhibit in China (Robert Rauschenberg preceded him with ROCI CHINA at the National Art Museum of China in 1985).

Brown created a five-panel painting, The Life of Christ Altarpiece, for the Museum of Contemporary Religious Art, St. Louis University, in 1992. The three central panels represent the Baptism, Descent From the Cross, and Resurrection of Christ, with two side panels of the Madonna and Child and the Descent into Hell.

In 1993, Brown completed The Assumption of Mary at Xavier University of Louisiana. The painting is three stories tall and is on a single canvas.

Crosby Kemper commissioned Brown to do a site-specific project for the Kemper Museum of Contemporary Art in Kansas City, which was under construction. In 1994, Brown’s personal interpretation of The History of Art, a series of 110 paintings chronicling the progression of art through human history was installed in the museum’s Café Sebastienne (named after Brown’s daughter, Sebastienne).

From 2002 to 2003, Brown had a retrospective exhibition titled Frederick J. Brown: Portraits in Jazz, Blues, and Other Icons. The exhibition traveled from the Kemper Museum of Contemporary Art and the American Jazz Museum in Kansas City to the New Orleans Museum of Art and the Studio Museum of Harlem. 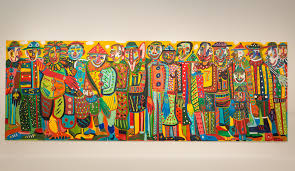