Edward Mitchell Bannister was a Black Canadian-American Tonalist painter. Like other Tonalists, his style and predominantly pastoral subject matter were drawn from his admiration for Millet and the French Barbizon School.

Bannister was born in St. Andrews, New Brunswick and moved to New England in the late 1840s, where he remained for the rest of his life. Bannister was well known in the artistic community of his adopted home of Providence, Rhode Island and admired within the wider East Coast art world: he won a bronze medal for his large oil “Under the Oaks” at the 1876 Philadelphia Centennial. But he was largely forgotten for almost a century for various reasons, principally racial prejudice. Bannister began his official career as an artist when an article in the 1867 New York Herald belittled both him and his work, stating “[…] the negro has an appreciation for art while being manifestly unable to produce it.” Prior to working as a painter, Bannister worked as a barber and tinted photos. In the late 1850s he attended lectures given by D. William Rimmer, a sculptor noted for his accuracy in rendering the human figure. Over the course of his career, Bannister was inspired by the Barbizon school-influenced paintings of William Morris Hunt who had studied in Europe and held numerous public exhibitions in Boston around the 1860s. Although committed to freedom and equal rights for Afro-Americans, he chose not to inject those issues into his work, adopting instead a spiritual philosophy and individually expressive style which represented harmony and liberty on a more universal plane.

As his career matured, Bannister accumulated many honors, several from the Massachusetts Charitable Mechanics Association. His two biggest support systems were his mother, who was the catalyst from the very beginning for his passion for the arts, and his wife, who also was an activist. Both strong supporters of abolition, wife Christina lobbied for equal pay for black soldiers during the Civil War and also organized the soldiers’ relief fair in 1864. In 1880, Bannister joined with other professional artists, amateurs, and art collectors to found the Providence Art Club to stimulate the appreciation of art in the community. Bannister was the only major African American artist of the late nineteenth century who developed his talents without the benefit of European exposure.

Although primarily known for his idealized landscapes and seascapes, Bannister also executed portraits, biblical and mythological scenes, and genre scenes. An intellectual autodidact, his tastes in literature were typical of an educated Victorian painter, including Spenser, Virgil, Ruskin and Tennyson, from whose works much of his iconography can be traced. His work reflected the composition, mood, and influences of French Barbizon painters Jean-Baptiste-Camille Corot, Jean-François Millet, and Charles-François Daubigny. He had an affinity for Native American thought.

Bannister died of a heart attack in 1901 while attending a prayer meeting at his church, Elmwood Avenue Free Baptist Church. He is buried in the North Burial Ground in Providence.

With the ascendency of the civil rights movement in the 1970s, Bannister’s work was again celebrated and collected. In 1978, Rhode Island College dedicated its Art Gallery in Bannister’s name with the exhibition: “Four From Providence ~ Alston, Bannister, Jennings & Prophet”. This event was attended and commented on by numerous notable political figures of the time, and supported by the Rhode Island Committee for Humanities and the Rhode Island Historical Society.

The house at 93 Benevolent Street in Providence, where Bannister lived between 1884 and 1899, was owned by Brown University until 2016. Brown renovated the property and restored it to its original appearance, and it was sold to Professor Jeff Huang as part of the Brown to Brown Home Ownership Program. 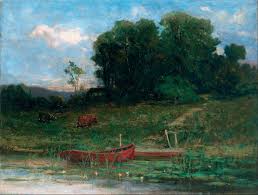