Earl Bradley Lewis is an American artist and illustrator. He is best known for his watercolor illustrations for children’s books such as Jacqueline Woodson’s The Other Side and Jabari Asim’s Preaching to the Chickens: The Story of Young John Lewis.

Lewis has been awarded prizes for his illustration work including the 2016 New York Times Best Illustrated Book Award for Preaching to the Chickens: The Story of Young John Lewis and the 2004 Caldecott Honor Award for Jacqueline Woodson’s Coming on Home Soon.

Lewis resides in Folsom, New Jersey and teaches at the Pennsylvania Academy of Fine Arts in Philadelphia.

Earl Bradley Lewis was born on December 16, 1956, in Philadelphia, Pennsylvania.

At Temple, Lewis majored in illustration, graphic design and art education. After graduating, he taught art for twelve years in public schools and at the Trenton Psychiatric Hospital. Presently, alongside his fine art painting and illustration work, Lewis teaches at the University of the Arts in Philadelphia.

E.B. Lewis has illustrated more than seventy books for children.

Lewis’ career as an illustrator of children’s books began in 1992 after his watercolors in Artist Magazine were noticed by agents Elizabeth O’Grady and her husband, Jeff Dwyer. They had ties to an art director from Simon & Schuster who at that time was seeking African American artists to illustrate children’s books. After talking over the details, Lewis was on board. Over the next year, he quit his teaching job and completed illustrations for his first collaboration with Jane Kurtz’s Fire On The Mountain.

Since then, he has provided illustrations for books such as Nikki Grimes’ Talkin’ About Bessie: The Story of Aviator Elizabeth Coleman, Alice Schertle’s Down the Road, Tolowa M. Mollel’s My Rows and Piles of Coins, Gavin Curtis’ Bat Boy and His Violin, Mary Ann Rodman’s My Best Friend, and Jacqueline Woodson’s The Other Side.

One book, Circle Unbroken written by Margot Theis Raven, was later set to the music of the late composer, William Grant Still, and performed in 2007 by members of Chamber Music Charleston for educational performances. A short film of the same name was also produced, featuring these performances alongside Lewis’ illustrations.

In 2003, a collection of Lewis’ original watercolors from the first fifty children’s books he illustrated was purchased by The Kerlan Collection at the University of Minnesota. His work is also in private collections throughout the United States.

In 2011, Lewis took a two and a half year hiatus to develop the direction of his fine artwork, citing that he wanted to “speak to what’s happening in our society”. The result of this was his “Lotto Icons” series, consisting of paintings on lottery tickets. These were covered with gold leaf and scratched away revealing solemn faces of impoverished children.

He currently sits on the board of the Hall of Fame of Children’s Book Writers and Illustrators and is a member of The Society of Illustrators in New York City. 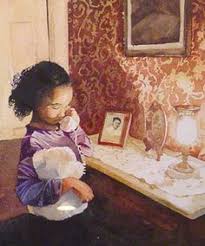