Paula Wilson is an African-American “mixed media” artist creating works examining women’s identities through a lens of cultural history. She uses sculpture, collage, painting, installation, and printmaking methods such as silkscreen, lithography, and woodblock. In 2007 Wilson moved from Brooklyn, New York to Carrizozo, New Mexico (population 996) where she currently lives and works with her woodworking partner Mike Lagg.

Paula Wilson grew up in Hyde Park on the south side of Chicago where her father, William Julius Wilson, was a professor of sociology at the University of Chicago. Her mother, Beverly Ann Wilson, is an artist and bookbinder.

Wilson is known for her monumental and tactile work describing narratives and environments that fit her experience as a biracial black woman. She reimagines art historical tropes and inserts versions of herself into the landscape and canon. Shifting between graphic and painterly representations, she builds narratives by collapsing pictorial planes. Wilson’s work is anchored in self-portrait, printmaking, installation, and collage. She prints images with wood blocks, silkscreens, intaglio, and monotypes; layers acrylic, oil, and spray paint; shoots videos inserting 2-D work into the landscape; she cuts, glues, and stitches to make colorful, dense assemblages. Her works often burst from their wall or frame, reflecting a constant re-assembly of lived experiences: black and white, urban and rural, traditional and contemporary, singular and collective.

Wilson is co-founder of the artist organizations MoMAZoZo (founded in 2010) and the Carrizozo Artist in Residency (AIR)(founded in 2016). 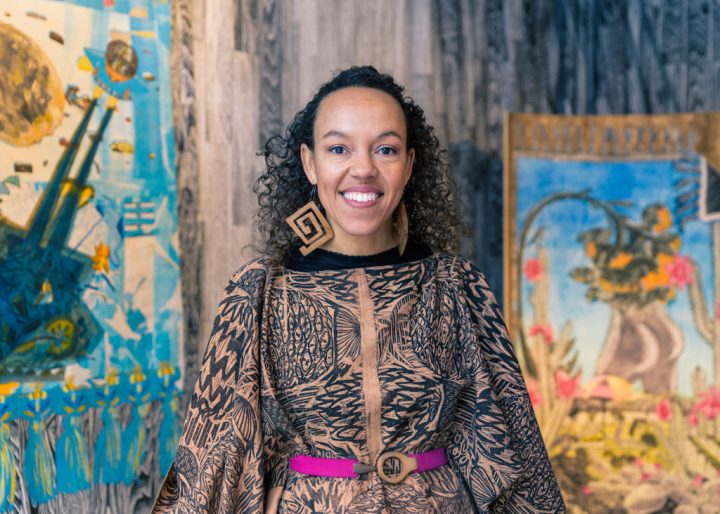