Amber Robles-Gordon is an American mixed-media visual artist.  She resides in Washington, DC and predominantly works with found objects and textiles to create assemblages, large-scale sculptures, installations, and public artwork. 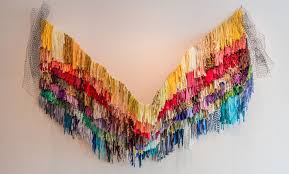 She received a BS in 2005 from Trinity College, in Washington, DC, and subsequently an MFA (Painting) in 2011 from Howard University, also in Washington, DC. Robles-Gordon has been a key member of the Black Artists DC, (BADC) serving as exhibitions coordinator, Vice President, and President. Robles-Gordon is also the co-founder of Delusions of Grandeur Artist Collective.

Robles-Gordon has exhibited widely in the US, Europe, and Asia. In 2010 she was granted an apprenticeship with the DC Commission on the Arts and Humanities to create a public art installation as part of the D.C. Creates Public Arts Program. She was subsequently was also commissioned to create temporary and permanent public art installations for the Washington Projects for the Arts, the Northern Virginia Fine Arts Association (NVFAA), the Humanities Council of Washington, D.C., Howard University, and the Schomburg Center for Research in Black Culture.