David Huffman is an American painter and installation artist. He is known for works that combine science fiction aesthetics with a critical focus on the political exploration of identity. 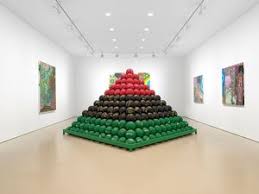 David Huffman was born and raised in Berkeley, California. His mother was an activist who supported various local causes in the 60s, including the Black Panthers for whom she designed the iconic Free Huey flag.

Huffman was exposed to science fiction early, in the form of television shows such as Star Trek, Astroboy and Shogun Warriors.

Huffman studied in New York and San Francisco receiving his MFA from the California College of Arts and Crafts.

Huffman says “I mine events, whether historical or contemporary, from various sources, where my metaphoric stories of conflict, enlightenment, fear and resolution combine…each body of work is discreet in materiality, but continues the dialog.” Works combine and recombine: pop culture iconography across eras, formal explorations in the medium of paint, science fiction aesthetics, and identity politics in an evolving lexicon that interrogates “the politics of race, activism, and painting itself”.

Later works continue to explore the politics of race in works that limit his iconography to the image of the basketball in combination with an abstracted deep space created of layered tones of browns and blacks.