Ellen Gallagher is an American artist. Her media include painting, works on paper, film, and video. Some of her pieces refer to issues of race, and may combine formality with racial stereotypes and depict “ordering principles” society imposes. 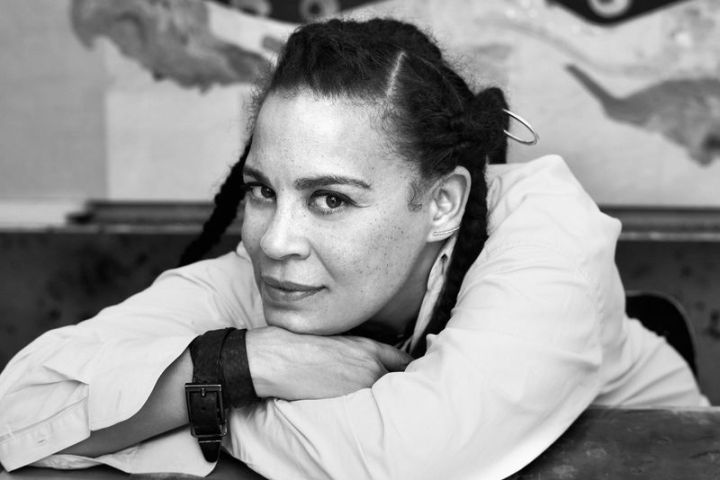 Gallagher was born on December 16, 1965 in Providence, Rhode Island. Referred to as African American, she is of biracial ethnicity; her father’s heritage was from Cape Verde, in Western Africa (but he was born in the United States), and her mother’s background was Caucasian Irish Catholic. Gallagher’s mother was a working-class Irish-American and her father was a professional boxer.

In Rhode Island, Gallagher attended Moses Brown, an elite, Quaker college preparatory school. At sixteen, Gallagher entered her first year at Oberlin College in Ohio (1982–1984) and studied writing. Gallagher did not finish her education at Oberlin College and ended up joining a carpenters’ union in Seattle.

Gallagher became recognized as an artist in 1995. Prior to her Gagosian showing, Gallagher had solo shows at Mary Boone in Soho, New York, and Anthony D’Offay in London, with Mary Boone being her first solo show in New York. Before her art career, Gallagher worked as a commercial fisherman in Alaska and Maine. As her first solo show in New York, Gallagher chose Mary Boone’s space because of its neutrality, in which she stated, “because there the abstract qualities of my work stand out first”. In 1993, Gallagher continued her art studies at the Skowhegan School of Paintings and Sculpture in Maine.

Gallagher is an abstract painter and multimedia artist creating minimalist work with subject narratives. Gallagher’s influences include the paintings of Agnes Martin and the repetitive writings of Gertrude Stein. Some of Gallagher’s work involves repetitively modifying advertising found in African American focused publications such as Ebony, Sepia, and Our World. Her most famous pieces are her grid-like collages of magazines grouped together into larger pieces. Examples of these are eXelento (2004), Afrylic (2004), and DeLuxe (2005). Each of these works contains as many as or more than 60 prints employing techniques of photogravure, spit-bite, collage, cutting, scratching, silkscreen, offset lithography and hand-building. Gallagher also glues notebook paper drawings onto her canvas to create textured surfaces.

Some of Gallagher’s early influences while attending the School of the Museum of Fine Arts in Boston was the Darkroom Collective, a group of poets living and working out of Inman Square in Cambridge, MA, and would go on to become the art coordinator of the collective. The Darkroom collective allowed Gallagher to explore her talent and apply her culture as an African-American woman to her work. One of her first exhibits took place at the Dark Room in 1989. Some other influences at the Museum School were Susan Denker, Ann Hamilton, Kiki Smith and Laylah Ali.

Themes related to race are often evident in Gallagher’s work, sometimes using pictographs, symbols, codes, and repetitions. “Sambo lips” and “bug eyes,” references to the Black minstrel shows, are often scattered throughout Gallagher’s works. Additionally, Gallagher would use these symbols in her collage pieces, inspired by lined yellow paper schoolchildren use. Certain characters are also used repeatedly, such as the image of the nurse or the “Pegleg” character that sometimes populate her page’s iconography. Some of her pieces may explicitly reference the issue of race while also having a more subtle undercurrent related to race. She was inspired by the New Negro movement as well as modernist abstraction. Gallagher also uses found historical images in her work. She combines formality (grid lines, ruled paper) with the racial stereotypes to depict the “ordering principles” society imposes.

As well as using racially charged imagery, Gallagher is known to portray bodies and include elements of poetry and pop culture in her work.  She uses golden tones to portray the racial binary in society. Her media includes paintings, works on paper, film, and video. She has made innovative use of materials, such as creating a unique variation on scrimshaw by carving images into the surface of thick sheets of watercolor paper and drawing with ink, watercolor, and pencil. These works depict sea creatures, of the mythical undersea world of Drexciya, which were the progeny of slaves who had drowned.  This mythology had been conceived by a musical duo of that name, from Detroit. Gallagher commented upon the process of creating these pieces: “The way that these drawings are made is my version of scrimshaw, the carving into bone that sailors did when they were out whaling. I imagine them in this overwhelming, scary expanse of sea where this kind of cutting would give a focus, a sense of being in control of something.” Some of Gallagher’s work would also consist of codes made from cut out letters. In some of her early pieces, she painted and drew on sheets of penmanship paper (ruled paper used for handwriting practice) she had pasted onto canvas.Her choice of penmanship paper is significant, in an interview with Jessica Morgan, she says “the sense of a neutral surface that can accommodate any mark seems an ideal way of communicating freedom,” which is described by her as “idiosyncratic” and “inscrutable”. As her previous work has been critiqued for being too racially charged, her newer work contains less explicit racial images to challenge viewers.`