Tatyana Fazlalizadeh is an American artist, activist, and freelance illustrator. She is best known as the creator of the campaign and art exhibition Stop Telling Women to Smile. 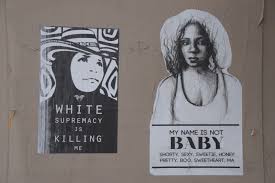 Fazlalizadeh grew up in Oklahoma City, Oklahoma, the daughter of Daryoush and Sandra Fazlalizadeh. Her mother was an artist and art teacher, but Tatyana did not begin creating her own art until she was in high school. She moved to Philadelphia to attend the University of the Arts, graduating in 2007 with a Bachelor of Fine Arts. She is of black and Iranian descent.

Fazlalizadeh is primarily an oil painter. Her work featuring President Barack Obama was included in the book Art For Obama: Designing Manifest Hope and the Campaign for Change, which was edited by artist Shepard Fairey. She is most well known for her Stop Telling Women to Smile campaign.

In addition to her work as an oil painter, Fazlalizadeh works as a street artist. Most of her public works are posters, like the ones found in the Stop Telling Women to Smile campaign. Much of Fazlalizadeh’s public works are designed to be ephemeral because of the way they are applied to the surface with wheat paste, weather and time cause the posters to fall apart. Given that her works are in the public domain and often have confrontational subject matter, they are often vandalized.

In 2012 Fazlalizadeh gained notoriety when she began to use street art to speak out against the street harassment of women. Her poster campaign, Stop Telling Women To Smile, was based upon interviews conducted with women about their experiences of public sexual harassment. Each poster features a portrait of a woman, along with a caption responding to her experience. Captions include statements such as “My outfit is not an invitation” and “No, you can’t talk to me for a minute.”  The campaign offers women an opportunity to fight back against their harassers.

In 2015, Fazlalizadeh took the project to Mexico to broaden the audience. In April 2015 Fazlalizadeh created “International Wheat Pasting Day” as another continuation of the Stop Telling Women to Smile campaign. As a part of this event, participants, in groups of three, went out on April 17, 2015, with images received from Fazlalizadeh to past works all over the world in various languages. Participants were also able to upload their plans and accomplishments to the STWTS website. Through this project, Fazlalizadeh aims to have her work and message reach a larger audience and to engage her supporters in her practice.

Published in 2020, Stop Telling Women to Smile: Stories of Street Harassment and How We’re Taking Back Our Power, documents Fazlalizadeh’s street art project. The book includes excerpts from the original interviews and images from STWTS, revealing Fazlalizadeh’s process and providing a “contribution to the important conversation about endemic sexism.”

In response to the 2016 presidential election, Fazlalizadeh wanted to make a work in her home and historically Republican state of Oklahoma. The text on the piece includes, “America is black. It is Native. It wears a hijab. It is Spanish speaking tongue. It is a migrant. It is a woman. Has been here. And it’s not going anywhere.” In this piece, the location of the piece in Oklahoma is just as important as the overall concept to Fazlalizadeh, according to her, because of its political history.  Fazlalizadeh’s work appears in the NetflixTV series She’s Gotta Have It.

In 2018 Fazlalizadeh was a participating artist in Round 48: “Beyond Social Practice” at Project Row Houses in Houston. Her installation “The Personal is Political” incorporated the stories of people who identify as Black, queer, and/or women to create political art.