Nanette Carolyn Carter is an African American artist and college educator living and working in New York City, best known for her collages with paper, canvas and Mylar (archival plastic sheets). Her father served as the city’s first African American Mayor (1968-1972),  and her mother was an elementary school teacher who also taught dance, later becoming a reading specialist and Vice Principal in the Paterson Public Schools.

In 1960, Carter’s family moved from Ohio to Montclair, New Jersey. A doctor of divinity, her father was also a civil rights leader dedicated to social justice and housing reforms and served as Chair of the New Jersey Commission on Civil Rights.

Carter earned a BA from Oberlin College in 1976, majoring in Studio Art and Art History. During her junior year at Oberlin, she lived and studied at the Accademia di Belle Arti in Perugia, Italy. After graduating, Carter enrolled in Pratt Institute, Brooklyn, NY, where she earned her Master of Fine Arts in 1978. That year, she began teaching printmaking and drawing at the Dwight-Englewood School, Englewood, New Jersey while she continued to develop her career as a full-time practicing artist.

Since 2001, Carter has taught drawing at Pratt Institute, Brooklyn, NY, where she is a tenured Adjunct Associate Professor.

In a 1984 Cooper-Hewitt Museum of Decorative Arts and Design exhibition, “Frank Lloyd Wright and the Prairie School,” Carter first saw Mylar in use by many of Wright’s students. Known today for her collages with paper, canvas and Mylar (archival plastic sheets), Carter’s work is recognized for its complex compositions, paintings, and drawings 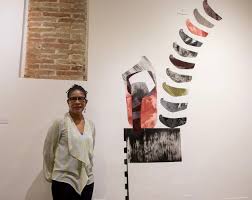 Her work directly responds to contemporary issues around war, injustices, and technology. She seeks to address the need for “negotiating the realities of inequality seen around the world” as evident in her series “Afro-Sentinels II” that emanates from the desire to combat racial injustice with a cadre of vigilant guards. A body of recent work, begun in 2013, “Cantilevered” becomes a metaphor for 21st Century life, “living with technology advancing every day, forcing one to look at global issues….responsibilities….a deluge of information and history.” In her creative practice for many years, Carter has been dedicated to working with intangible ideas around contemporary issues in an abstract vocabulary of form, line and color, and to present the mysteries of nature and human nature. She seeks to achieve at the same time luminosity, transparency, and density in her compositions.