Candida Alvarez, was born in Brooklyn, New York, in 1955. She is an American painter and a tenured professor of Painting and Drawing at the School of the Art Institute of Chicago where she has taught since 1998. 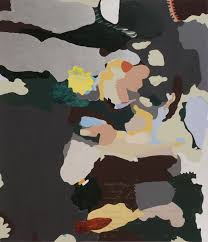 Candida Alvarez was born in Brooklyn to parents who had arrived from Puerto Rico two years earlier, and grew up in the Farragut Houses. Alvarez earned a BFA from Fordham University in 1977 and studied at the Skowhegan School of Painting and Sculpture in 1981. She earned her MFA from Yale School of Art in 1997 and studied at the European Graduate School in Saas-Fee, Switzerland from 2010-2012.

Alvarez is a painter known for her complex vibrantly layered combination of abstract and figurative forms rich in pop, historical and modern art references, incorporating world news and personal memories. Many of her paintings employ silhouettes and bold colors, and display a fascination with the aesthetics of cartoons, kitsch, and the hand-crafted.

Alvarez’s works have included sculptures, collages, abstraction, and figuration, with materials as diverse as fabric, acrylic paint, enamel, galkyd, on various supports from canvas to cotton napkins to vellum. In Mambomountain, presented from December 2, 2012 to March 24, 2013, at Hyde Park Art Center in Chicago, Alvarez’s brightly colored paintings offer distortions of the familiar. In Drawinggreen, presented from September 14, 2012 to October 13, 2012, at Riverside Arts Center in Chicago, Alvarez’s plan with this artwork was to transform Freemark Gallery to ‘directed reflection on a travel memoir’. According to the Hyde Park Art Center, in these works, “current and historic moments and identities are fused together onto the canvas, producing a hybrid state of uncharted territory.” Her painting has been included at the Kemper Museum of Contemporary Art in Kansas City.  It was adopted by avant-garde Japanese fashion designer Rei Kawakubo.  For the past two decades, she has taught at the School of the Art Institute of Chicago.

In an interview published by Hyde Park Art Center, Alvarez stated, “Having run away from seemingly inadequate definitions for abstract painting, I find myself immersed in a relationship that tracks, exchanges, and shreds the world of news, front-page photography, design, and pictorial memory into a subject-less pictorial mash-up. In essence, there is no more picture; there is only painting.”

Other well-known works by Alvarez include Recollections: Works on Paper by Candida Alvarez & Vincent D. Smith presented at the Brooklyn Museum in 1979