Skip to content
Known for his flamboyant performances, Little Richard’s hit songs from the mid-1950s were defining moments in the development of rock ‘n’ roll. 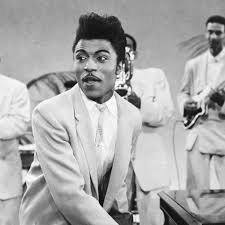 Who Was Little Richard?

Little Richard helped define the early rock ‘n’ roll era of the 1950s with his driving, flamboyant sound. With his croons, wails, and screams, he turned songs like “Tutti Frutti” and “Long Tall Sally” into huge hits and influenced such bands as the Beatles.

Born Richard Wayne Penniman on December 5, 1932, in Macon, Georgia, Little Richard was the third of 12 children. His father, Bud, was a stern man who made his living selling moonshine and didn’t do much to hide his disdain for his son’s early signs of homosexuality. At the age of 13 Richard was ordered to move out of the family home, and his relationship with his father was never repaired. When Richard was 19, his father was shot dead outside a local bar.

The childhood that Richard did manage to have was largely shaped by the church. Two of his uncles, as well as his grandfather, were preachers, and Richard was involved with the church as much as anyone in his family, singing gospel and eventually learning to play the piano.

Upon moving out of his family’s home, Richard was taken in by a white family who owned a club in Macon, where Richard eventually began performing and honing his talent.

In 1951 Richard caught his first major break when a performance at an Atlanta radio station yielded a record contract with RCA. But with a repertoire of mainly mild blues numbers that masked the searing vocals and piano that would come to define his rock music, Richard’s career failed to take off as he’d hoped it would.

In 1955 Richard hooked up with Specialty Records producer Art Rupe, who’d been hunting for a piano-pounding frontman to lead a group of musicians in New Orleans. In September, Richard stepped into the recording studio and pumped out “Tutti Frutti,” an instant Billboard hit that reached No. 17.

Over the next year and a half, the musician churned out several more rock hits, including “Long Tall Sally,” “Good Golly Miss Molly” and “Send Me Some Lovin’.” With his blood-pumping piano playing and suggestive lyrics, Little Richard, along with the likes of Elvis Presley and Jerry Lee Lewis, established rock as a real musical form and inspired others, most notably the Beatles, to make a go of it.

Gospel Music and Return to Rock

But as his success soared, Little Richard, fueled by his earlier connections to the church, saw his doubts about rock deepen. In 1957 he abruptly and publicly quit performing rock and committed himself to the ministry and recording gospel songs. He recorded his debut religious album, God Is Real, in 1959.

In 1964, following the Beatles’ recording of “Long Tall Sally,” Little Richard plunged back into rock music. Over the ensuing decades, Little Richard continued to perform and record; though the public response failed to match the enthusiasm that greeted his earlier success, his importance in the development of rock music has never been questioned.

In 1986 Little Richard was one of the 10 original inductees into the Rock and Roll Hall of Fame. He was a recipient of a Lifetime Achievement Award from the National Academy of Recording Arts and Sciences in 1993, and a year later the Rhythm & Blues Foundation honored him with its prestigious Pioneer Award.

In later years, the once-dynamic performer retreated from the concert stage. He fell ill during a show in Washington, D.C., during the summer of 2012. The following September, Little Richard suffered a heart attack. He described the incident to Cee Lo Green during an interview in Atlanta: “The other night, I didn’t know I was having a heart attack. I was coughing, and my right arm was aching.’

The singer took baby aspirin, which his doctor credited with saving his life. The deeply religious music icon attributed his survival to a higher power: “Jesus had something for me. He brought me through.”

Little Richard’s agent confirmed that the singer passed away on May 9, 2020, in Nashville, Tennessee from bone cancer.