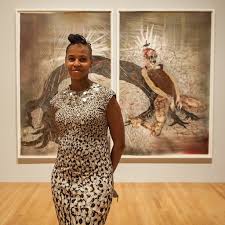 Wangechi Mutu a prominent international contemporary visual artist known primarily for her painting, sculpture, film and performance work. Born in Kenya, she has lived and established her career in New York for over twenty years. Mutu’s work has directed the female body as subject through collage painting, immersive installation, and live and video performance all the while exploring questions of self-image, gender constructs, cultural trauma and environmental destruction.

Mutu was born in 1972 in Nairobi, Kenya.  She was educated at Loreto Convent Msongari (1978–1989) and later studied at the United World College of the Atlantic, Wales (I.B., 1991). Mutu moved to New York in the 1990s, focusing on Fine Arts and Anthropology at The New School for Social Research and Parsons School of Art and Design. She earned a BFA from Cooper Union for the Advancement of the Arts and Science in 1996 and a master’s degree in sculpture from Yale School of Art in 2000.

Mutu honed her passion for drawing as a child in Nairobi, where her father’s paper-import business kept her supplied with materials. In 1989 she left to attend the United World College of the Atlantic in St. Donats, Wales. After a brief return home in 1991, she moved to New York City, where she studied at Parsons School of Design and then Cooper Union (B.F.A., 1996). After earning a master’s degree in sculpture (2000) at Yale University, she moved to Brooklyn.

Best known for her collages, Mutu gathered imagery from sources ranging from such magazines as Vogue and National Geographic to old medical illustrations and recombined them into startling hybrid figures in otherworldly landscapes. She embellished skin, exaggerated facial features, and replaced limbs with gears, wheels, and animal parts. With such titles as Your Story, My Curse (2006) and Root of All Eves (2010), the images provoked and allured. Mutu also created room-sized installations, using found as well as crafted objects. Initially her use of room-sized installations was as settings in which to view her videos. All her work examined and extended the female body, which she saw as the point of departure in her art. By gathering, juxtaposing, and repurposing images and objects, she commandeered control and subverted the long-standing habit of art and culture to project all “that is desired or despised” on the body of women.

Mutu’s inaugural U.S. retrospective—organized in 2013 by the Nasher Museum of Art at Duke University in Durham, North Carolina—traveled around the country in 2014 and featured three newly commissioned works, including her first animated film, The End of Eating Everything (2013), for which she collaged the head of recording artist Santigold on an enormous amorphous body to create a glorious but voracious beast that devoured everything in its path. Mutu also designed fabric in 2014; two printed textiles she created were used by 23 fashion designers, including Sarah Burton and Phoebe Philo, for the Born Free campaign, which sought to end the transmission of HIV from mothers to their children by 2015.

In 2014 Mutu also created #100days, which was conceived to commemorate the 20th anniversary of the 100-day Rwanda genocide. For 100 consecutive days (April 6–July 7), she posted a new photograph on Instagram (with the hashtags #kwibuka20 and #100days). Subjects included women in contemplative poses, disembodied limbs, cooking pots, and dry flowers. Each image, paired with a poem by Juliane Okot Bitek, bore a number in descending order. The series exemplified Mutu’s commitment to collaboration and social engagement. She regarded her art—from drawing and collage to social media—as “an intimate day-to-day meditation” driven by her “desire to figure things out.”