Toyin Ojih Odutola is a contemporary artist who focuses on the sociopolitical construct of skin color through her multimedia drawings. Her work explores her personal journey of having been born in Nigeria then moving and assimilating into American culture in conservative Alabama. “I’m doing black on black on black, trying to make it as layered as possible in the deepness of the blackness to bring it out.

Ojih Odutola was born in 1985 in Ife, Nigeria, where both her parents were teachers. In 1990, her family moved to Berkeley, California, where her father was doing research and teaching chemistry at the university. After four years in Berkeley, the family moved to Huntsville, Alabama, where her father became a professor and her mother a nurse. She is of Yoruba and Igbo descent from her paternal and maternal heritage, respectively.

She received a Bachelor of Arts degree in Studio Art and Communications from the University of Alabama in Huntsville in 2008.  In 2012, she earned a Master of Fine Arts degree from California College of the Arts. She is represented by the Jack Shainman Gallery in New York City, where she lives and works.

Ojih Odutola is best known for her highly-detailed portrait drawings, entirely or primarily done in black pen ink. Her more recent work has expanded to include charcoal, pastel, and pencil. She credits her high school art teacher, Dana Bathurst, for introducing her to African American portraiture artists such as Jacob Lawrence, Elizabeth Catlett, Romare Bearden and Barkley L. Hendricks. 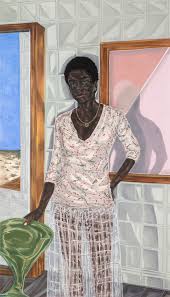