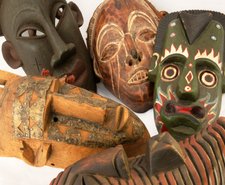 They are also considered to be among the finest pieces in the world of art and are usually highly sought after. They are usually carved out of wood, although some are made of cloth and other materials. They are sometimes decorated with beads and paint.

Most masks are made not to look like real human faces. They are usually designed and created to provide somewhat of a shock value. They tend to convey various emotions such as sadness, anger or suspicion.

They play very different roles to the various tribes across the continent. It can take weeks for a mask to be worked on and completed. Once finished, it is kept in a safe and sometimes sacred place, only to be brought out for important occasions and ceremonies.

Masks were and still are usually worn during various celebrations such as weddings, funerals, initiation ceremonies, and to entertain important visitors. African masks are normally worn by men, however in some cultures women also own and perform in masks. One example will be during a ritual that initiates them into female society.

When it comes to wearing the masks, in addition to the common way we know how to wear one, there are also other ways of wearing them. They can be worn on the head as helmets covering the entire head or as a crest, resting on top of the head.

For those of us who watch the Discovery Channel ,the most common use of the African mask we see involves ritual dancing. This involves the dancer wearing a mask and full costume. Often there is singing and music in these rituals and the mask becomes a strong spiritual force. During some of these ritual dances, because of the power certain masks possess, some people are not allowed to look at them.

A large part of African culture involved rituals and ceremonies. However with education, development and influences from other cultures, some cultures have lost some of their tribal beliefs, causing such ceremonies to be on the verge of extinction in Africa.