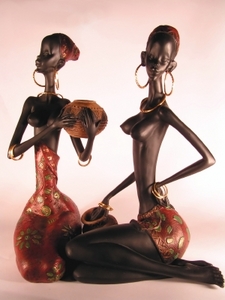 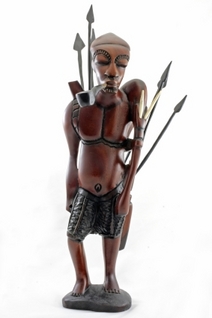 This is evidenced by the fact that it’s still being debated as to form, style and meaning. The most important African art has always been considered to be antique and traditional art. However, over the last 40 years, modern African artists have sought to bring the qualities of tradition to present day art while seeking a forum in the world’s art community. Contemporary art within the continent can be traced to the Sub-Sahara region where artists began to combine ancient art forms with creative mediums. Whereas you might not be able to visually recognize the meaning in traditional African art, the contemporary versions include allusions and references to the past. There is also greater use of personal preferences and a creative freedom that does not exist in ancient art.

While ancient African art was often limited by regional material availability, modern African art can use new materials at will. Contemporary artists have expanded beyond painting and sculpture and now include videos and other modern inventions in their work. Some people have had a difficult time seeing this modern art as being true African art, yet that’s exactly what it is in every respect.

Contemporary African art blends the past with the present. Realizing that the African continent is the human story, past values and regional cultures become the groundwork beneath the modernist styles. The result is a fascinating art form that speaks to the viewer of the present turmoil while evoking a rich cultural past.

The roots of this kind of artwork can be found in the first colleges devoted to Fine Arts: The School of Fine Arts at Makerere University College and Achimota College. Other schools followed in Zaire, Sudan, the Congo and Nigeria. Since the 1930s these various universities and art schools have trained contemporary African artists. In fact, contemporary artists have studied at schools around the world over the last 50 years in an at Contemporary African art has not been widely recognized in the traditional art world for many reasons. One of the main reasons is the generalized belief among many people outside Africa that African art is primitive and undeveloped. Yet when African artists display unique creativity and stunning art, they are criticized for abandoning their traditional roots.

Much of this attitude is changing with the recognition of the African diaspora. The diaspora is composed of African descendants who live outside of Africa. Many of their original African ancestors were sold as slaves, and it’s their descendants which form the diaspora.

The diaspora has resulted in recognition of contemporary African art as a legitimate art form. The diaspora creativity also proves without a doubt that African culture is deeply rooted and location cannot stifle artistic expression. However one of the most important benefits the African art world experiences through the diaspora is world recognition that art does not need to be limited to a particular form or style (such as primitive).

Such artwork cannot be defined as a single style. The contemporary artists have used a variety of materials, forms and styles to reflect the complex makeup of African cultures and traditions. The ancient symbolisms and meanings are combined with modern messages about a continent’s ability to survive and thrive amid political and social upheavals.

What is contemporary African art ? It’s whatever the artist chooses it to be.