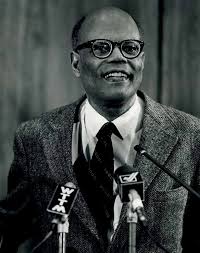 Sir William Arthur Lewis was an economist and the James Madison Professor of Political Economy at Princeton University. Lewis was known for his contributions in the field of economic development. In 1979 he was awarded the Nobel Memorial Prize in Economic Sciences. He had dual Saint Lucian and British citizenships. END_OF_DOCUMENT_TOKEN_TO_BE_REPLACED