Khalik Allah is an American filmmaker and photographer. His 2015 documentary film Field Niggas and his 2017 book Souls Against the Concrete depict people who inhabit the notorious Harlem corner of 125th Street and Lexington Avenue in New York City. His film Black Mother (2018) depicts people on the island of Jamaica. “He favors visual portraits of people on the street – filming their faces for several seconds as they pose as if for a still camera.”

Allah was born in Brookhaven, New York. His mother is Jamaican and his father is Iranian. He grew up in Suffolk, Long Island, New York, but moved between Queens and Harlem throughout his childhood.  His parents met at university in Bristol, England. He is a dual Jamaican-American citizen.

Described by The Village Voice as “more a woozy experience you press through than an ethnographic study you watch, Khalik Allah’s hour-long non-narrative street-life doc Field Niggas stands as the most striking sort of urban portraiture.” The film comprises observational footage of, and interviews and discussions with, people at night around the notorious Harlem street corner of 125th Street and Lexington Avenue in New York City. Its subjects are predominantly African American, experiencing poverty, homelessness, drug addiction, and harassment from the police; people with “a hunger to have their voices heard”. The police are also portrayed.

The film’s title is taken from “Message to the Grass Roots”, a public speech delivered by human rights activist Malcolm X in 1963, “extolling the spirit of rebellion among outdoor slaves.” The film was made in summer 2014,  filmed using a handheld camera. Apart from the cinematography, it includes surveillance footage of the strangulation of Eric Garner as well as the overdubbed sound of field hollers by a 1950s chain gang.

Allah released the film for free on YouTube and Vimeo in 2015 for a short time, before removing it at the request of True/False Film Festival so it could show there. It has since been shown on the film festival and college circuits in the US and Europe.

Souls Against the Concrete

Souls Against the Concrete consists of Allah’s photographs of people at night around the intersection of 125th Street and Lexington Avenue in New York City, between 2012 and 2016.

Allah used slow speed color film, usually intended for daylight photography, for its high contrast, with a 35 mm SLR camera from 1971. Because of photographing at night using available light, he used a fast manual focus normal lens at a large aperture (hence the shallow depth of field).

Black Mother was made in Jamaica, its subjects are holy men, sex workers, beggars, hawkers, and children. It was made in the same fashion as Field Niggas: “visual portraits of people on the street – filming their faces for several seconds as they pose as if for a still camera” – with a soundtrack out of synch with the images. 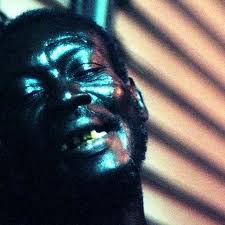